You are using an out of date browser. It may not display this or other websites correctly.
You should upgrade or use an alternative browser.

My interest in flat track came on me belatedly (I'm congenitally slow on the uptake), even though my street Triumphs benefitted a lot from FT developments. So I missed a lot of what, to me, would have been the particularly interesting years. In other words, I have ignorance issues.

I've seen a number of photos of Tri/BSA triple-based flat trackers, but virtually no information about them -- to what degree the factories and/or US distributors were involved; how they performed and behaved on the track; whether they are few because the money dried up or because they didn't work very well ... I got all kinds questions.

Can anybody direct me to a source of hogwash-free info about these bikes? Probably some of you geezers have personal experience; if so, and if you have the patience to discuss the bikes and the situation, I'd sure like to read what you care to write. Thanks to all (and thanks again to FTF).

I'm assuming you are referring to the recent Triumph FT efforts from the late 20-teens.
That story (or various ones) is out there. I've heard bits and pieces, but cannot direct you to any specific source.
There were some issues. They had some good riders on them so THAT wasn't the problem. I believe more than anything, it was the entry of the Indian FTR that killed Triumph (and everything else) in AFT's top tier of competition. Very simply, Indian built a bike that can't be beat on any kind of regular basis. Then AFT put entry restrictions in place that has made it virtually impossible for anyone without a BIG money "team" backing them to even enter.

The bright spot is "Production Twins" and there is a recurring rumor that Triumph is coming back in that class. ...but then the guy who was supposed to be riding for them showed up this week on a Kawasaki. Who knows??? I do know that the local Triumph shop is THE ONLY motorcycle dealer who has recently received new bike deliveries of any significance! The motorcycle business is as weird as it has ever been I believe. Thanks covid! Demand is high but supplies are low, or non-existent. Small shops are feeling that pinch worse than anyone and they are the guys who keep grass roots racing (and development) alive. Rules that make competing even more difficult are not a welcomed addition to that scenario and racing (from a factory perspective) is marketing. If there is nothing to gain from a sizable investment, MFG's aren't going to do it. One need only look at the Asian (factory) involvement in the sport. Whether an independent picks up the Triumph banner and carries it into FT again is yet to be seen. What you will definitely not see is triples! At least in national competition... unless AFT changes the rules to allow it.

BSA and Triumph used the Rocket 3 and Trident for a very short time in the early '70's. Remember, 1973 was the last model year for BSA, and I believe it was not a full year's worth of motor bikes. From what I have seen, the triple was only used on the miles, and not very often. I have seen photos of Jim Rice on a Trackmaster, and someone on the Triumph team (maybe Gene Romero) on a Rob North road racer sort of converted to a flat tracker. I believe it was on a groove track, similar to Springfield.

According to Bert Sumner's AMA history page, the BSA Rocket 3 was approved for use in 1969, as was the Triumph Trident. That was the first year for the 750cc OHV engines, and neither brand had a 750cc twin at the time.

Also from Bert's site, is this nice little nugget:

Jim Rice wins the Sedalia Mile on a BSA Rocket III on August 24, 1969. It is the only Grand National dirt track win ever for a three-cylinder motorcycle.
Click to expand...

While it is only a proxy impact to the triples which were long gone by then, since 1989 GNC/AFT rules have specified "750cc TWIN CYLINDER motorcycles" for what is today the "premier" class.
This rule change was a direct response to the competitiveness of the 600cc Rotax engine, but as it allowed only twins, it bans the entry of triples as well.

THE bright spot in all this is Triumph's recent announcement of a promised single AND a factory backed MX effort! Guys are already standing in line waiting for those promised bikes to become available and convert them to dirt trackers.
Together with the persistently rumored Bonnies in development, IF these singles become available I think it is certain they will quickly make it to the much easier to enter AFT Singles field. How competitive they will be is something everyone is anxious to discover.
Last edited: Jul 29, 2021

Correct, mostly. From 1976 onward, you could only use a single cylinder or twin cylinder bike if you were a Junior or Expert on TTs, Half Miles, and Miles. In 1989, Half Mile and Mile tracks were limited to 750cc twins only. The twins were never banned from TTs. It wasn't until Short Track and TT bikes switched to the 450cc singles in 2006 that a 750cc twin could no longer be used.

oupa, calkins, thank you. I neglected to say up front that my curiosity concerned the Trident/Rocket 3-powered bikes of 1969-73 or '74, but learning a bit about the current situation gives me something new to be interested in/aggravated about. I suppose it would be opening a huge can o' worms to ask where the governing bodies'* heads are at? On the face of it, it seems like they're making potentially disastrous decisions -- I mean, disastrous for the sport as a whole. But then I guess plenty of well-informed folks have been saying that throughout my adult lifetime.

* Is it the A.M.A. that's blanketly in charge, or the more dirt-track-specific racing groups?

Thanks again, and calkins, I'll check out the links you posted.

Woop. I see oupa answered my footnote question in his first post. AFT, huh, thanks.

The American Motorcyclist Association (AMA) is the sanctioning body for most or all motorcycle motorsports in the United States Of America. They are located in Ohio, and commonly referred to as AMA-Ohio. I have proudly been an AMA member since 2008, when I started riding.

The Daytona Motorsports Group (DMG) is the company that bought the rights to hold flat track races under the American Flat Track banner, as well as MX, ATVMX, and hillclimb. They are all under the sub-banner of AMA Pro Racing. This would be considered AMA-Florida/Daytona. DMG is to blame for the direction of "professional" flat track since the 2006 season.

If you are interested in modern Triumph racing, keep an eye open in the upcoming months. Triumph recently announced the will be producing motocross and enduro motorcycles soon. As a diehard Triumph fan, with the tattoos to prove it, I am hoping for a 250cc and 450cc bike that can be used in amateur and professional flat track.

Also, as noted above, Bill Gately with Bonneville Performance is still trying to get a modern liquid cooled Bonneville twin back on the AFT tour full time. It is on his own retirement dime, with little to no support from sponsors. So keep the faith, and be patient, it will happen in due time. I have personally worked on his air cooled bikes at the track, and they are a great group of guys that are out there for the love of the sport and the brand.

My photo from the Knoxville, Iowa half mile, the last time I worked with them, and the Bonneville America I had at the time to the left of Bill's street tracker and super tracker;

So as not to clog up this thread with sincere but unuseful thank yous, I hope you guys will assume henceforth that I'm grateful for and interested in any further schoolings and/or offhand observations you post up. No more oohs and ahhs from me for a while. Please keep it coming. 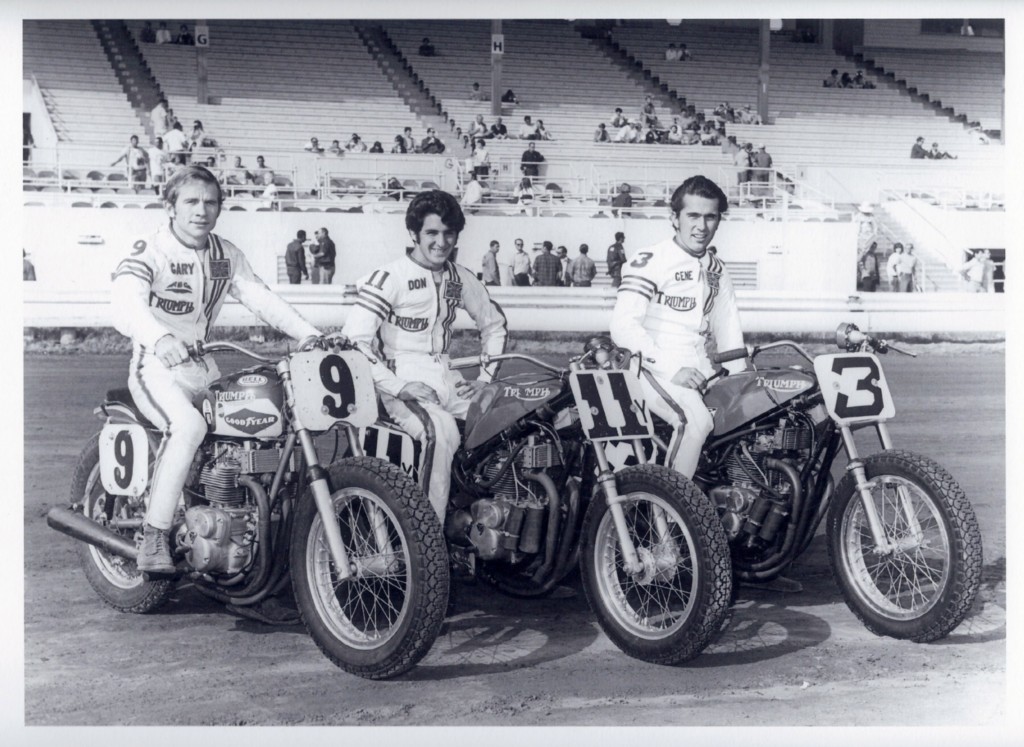 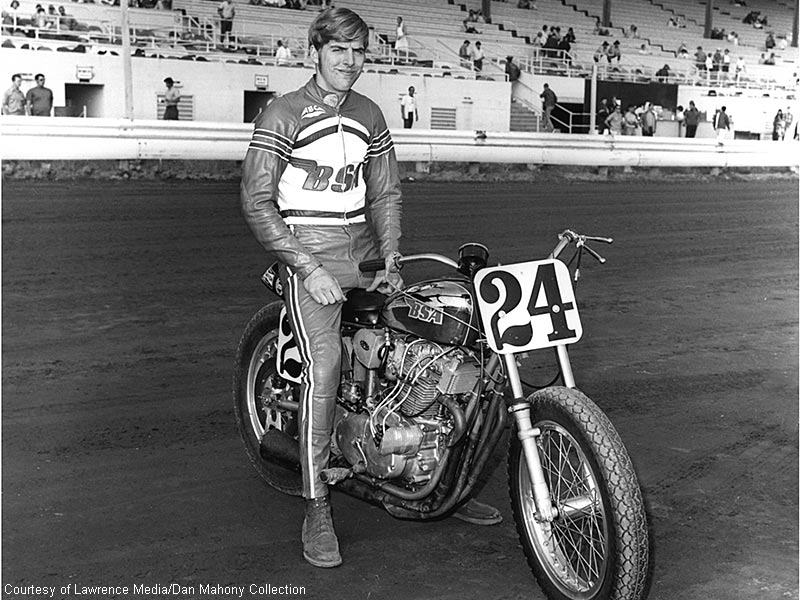 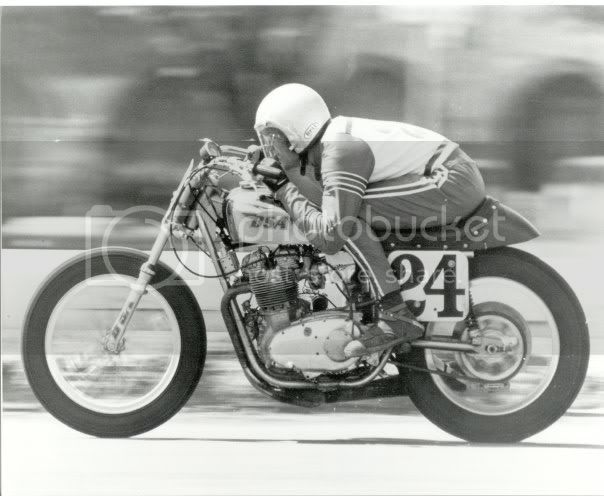 More info one the 2 different models of the Triumph Triples would be great, do notice Nixon is on a conventional frame with Castro and Romero on a complete different frame system.

Don Castro and Gene Romero are on the Rob North road race frames I spoke of earlier.

The BSA is an A75, as they only had the four speed version of their triple.
Last edited: Aug 12, 2021
Reactions: oupa and Far West Fast Eddie
8

But did they handle?
H

Calkins said:
Don Castro and Gene Romero are on the Rob North road race frames I spoke of earlier.

The BSA is an A75, as they only had the four speed version of their triple.
Click to expand...

The Romero and Castro bikes are Road Racers converted for the event. They are 5 speeds as they are the same engines as used for Road Races. Rice's Trackmaster has a special Tom Cates built short rod engine. The BSA Road Racers at that time also used the 5 speed transmission. David Aldana raced the BSA West Cates bike in the Amateur class at Nazareth in 1969 after Yvon DuHamel declined the ride. David won. Castro did well with a Rob North Triumph. Nixon did well with TriCor Trackmaster Triumph. Romero practiced a Rob North but declined to race it. Dick Mann was not interested. Ken Pressgrove raced the BSA West bike as did Alan Kenyon. The BSA West Trackmaster was also used for roadracing in the off season by Ralph White and Don Emde. A BSA East Herb Neas bike was raced by DuHamel. Jomo built two Trackmaster Triumphs that were raced by Ralph White, Tommy Rockwood, and Bob Bailey. Once the Triumph 750 twins were approved interest in the triples evaporated.
Last edited: Dec 31, 2021
Reactions: Calkins

hugoct said:
The Romero and Castro bikes a Road Racers converted for the event. They are 5 speeds as they are the same engines as used for Road Races. Rice's Trackmaster is a special Tom Cates built short rode engine. The BSA Road racers at that time also used the 5 speed transmission.
Click to expand...

Were those early Quaife units, or a special in-house deal?

Just a grainy photo of Rice's Trackmaster Triple, outside Dan Rouit's house in 1987.